Hello again. Sorry it's been so long. I've been dealing with school.

Anyway, for a quick post, here are some wonderful animated commercials from the talented animator/director, Oscar Grillo. I don't know his exact professional history, but I know that he was in London during the time Richard Williams was producing commercials under the tutelage of Golden Age animators Grim Natwick, Art Babbitt, and Ken Harris. Oscar Grillo eventually founded his own studio to produce commercials of his own. Here are but a few samplings of his work.


The first two here are advertisements for Welsh TV station S4C-TV. These are very interesting specimens, as the animation style is a bit more UPA-esque, with a little mixture of Warner Brothers. These show that stylized or limited animation need not be a hindrance. It doesn't matter how many drawings you have, but that the drawings you do have are used to tell your story or convey your message in a meaningful and entertaining way.

This spot is for Heineken Beer. This spot is reminiscent of the early Tex Avery cartoons (in particular the WWII toon Blitz Wolf). I am quite surprised that Disney would allow an ad for Heineken to use their song Who's Afraid of the Big Bad Wolf. Oh well, it makes for an entertaining ad.

This one is my favorite of the group. It is an ad for Oddbins Wine Tasting. Why it's a favorite of mine is that the design of the characters were done by legendary cartoonist/illustrator Ralph Steadman. The music is provided by the renowned Spike Jones and his City Slickers. This spot makes me yearn for an animated version of Fear and Loathing in Las Vegas, with characters based on the Steadman illustrations.


These are but a taste of the work Grillo has done. There are many more on YouTube, along with the ads by Richard Williams and Tony White. I hope you've enjoyed this.

Until Next Time.
Posted by Eric Noble at 3:41 PM 2 comments:

Getting Up to Date

Sorry I haven't updated in months. Been feeling uninspired, not to mention I was finishing up with school. I'm here now to give you a little update on what's happening.

First off, I'm in Montana right now at my grandmother's house. She doesn't have Internet access, so I have to use the town library and a laptop my sister lent me. I won't be back for a few weeks, but if you've waited this long, a few more weeks will mean nothing to you.

As far as drawing goes, I have been making my way through Paul Richer's classic tome, Artistic Anatomy (below)

I'm going through each of the anatomy plates and drawing them. I'm trying to understand how the parts of the body work and how they work as a whole. After that, I want to go through Dynamic Figure Drawing by Burne Hogarth. Wish me luck with this.

Again, my biggest hurdle is getting enough motivation to just sit down and do it. Wish me even more luck with this.

Next time, I'll try to post a few drawings.

Until Next Time
Posted by Eric Noble at 12:21 PM No comments:

There is so much to be learned about drawing that it can be quite daunting. It is a constant journey through life. However, as Confucius said, "The journey of a thousand miles begins with that very first step." The dilemma for me is which step do I take. In what direction do I start?

I am currently in a life drawing class, and I realized that life drawing will do me no good if I don't know the other parts, like light, value, and perspective. This is just adding another load onto me. I need to find some organization to this. Since I am mostly teaching myself, there is no structure to this journey. Does anybody have any suggestions?

Perhaps the biggest part of my problem is my motivation. So many distractions surround me, and I allow them to draw mw away from my studies. That will have to be my own personal hurdle.

To all of my artist friends or to those who have any ideas on how to move forward, I eagerly await your answers. Until then, I will be working my way through my many art books. Thank you for reading.
Posted by Eric Noble at 9:46 AM 3 comments:

The Illusionist: The Magic of Animation isn't Dead Hello dear readers (all three of you). I have returned from the netherworld in which we call reality. I am hear to give you a review of the darling of the animation world, The Illusionist. I have heard plenty of good reviews, and some bad reviews. I decided to check it out myself. I went to the only theatre in Seattle that was showing it, paid my fare, and went in. I have to say this: I LOVED it!

This movie was magic to me. It has reaffirmed my love for animation, and given me new hope for the medium.

Synopsis: An aging magician is at the end of his career. Constantly playing smaller and smaller venues, he plays at a pub in rural Scotland. There he meets a young girl, who is astonished by his illusions as he bestows gifts to her. She joins him as he travels to Edinburgh, where he takes up more and more menial jobs just to support the girl's illusions.

Okay, to start off, the animation and visual style of this movie are wonderful. It is only once or twice that the animation dropped in quality, becoming very choppy and TV-like. I chalk that up to the film's status as a foreign co-production. It's hard to keep track of quality when so many animation studios are involved. However, these are minute quibbles. For the most part, the animation was astounding. While it was not overly cartoony, it does convey the emotion and attitudes of the character. Each one had their own way of walking, body language that gave them an individual identity. That is always a plus for me.

This has led me to a greater understanding of animation. I think I am truly beginning to understand the use of caricature in the artform. Caricature allows the artists to get at the heart of a character's psyche. Perhaps that is why many animated films are done with a more simplified storyline. It allows the animators to utilize that tool to express characterization. That kind of simplicity truly works for this film. It is not overtly complex in its plot, but it doesn't need to be. It's about the characters and the world they live in.

However, underneath that simplicity lies a rich emotional core. The film is all about magic and illusions. For starters, the protagonist is a magician. There are other performers/illusionists in this film, like a ventriloquist and a clown. Throughout the film, the film exposes the lie and blatantly comes out to say, "Magic does not exist." That adds a double meaning, especially since the film is an animated one. I will say that there was a lump in my throat by the time the movie ended.

I will say at first that the movie started out a little rocky. It was beautiful to look at, but just didn't grab me as I wanted it to. As soon the girl Alice was introduced to us, I began to get more into it. It added that humanity and warmth that I needed. As the film went on, I became more and more entranced and involved in this world. Everything felt real to me. Not a single thing rang false, and that is one of the greatest achievements a movie can make. That, and I felt like I was in an adult world, not Hollywood adult, but almost like the real world. It wasn't physically real, but the emotion was real, and that is the important part in my book.

One of the complaints drawn up against the film is that the relationship between Alice and Tatischeff is creepy and inappropriate. I didn't see it like that. call me naive, but I felt it was more like a grandparent relationship. It reminded me of William Hartnell and Carole Ann Ford's onscreen relationship in the early Doctor Who. It was completely platonic. Another issue people draw against this movie is that Alice was not a likable character, that she was using Tatischeff. My rebuttal is that she is not using him. She is just that impressionable child who believe the illusions Tatischeff presents her. She came from a village that only recently got electricity earlier in the movie. Besides, Alice is not a bad person. She is just at that age where she is a bit self-absorbed. I have been there. I identified with that. It added dimension to her personality and made her feel like a real person. She's a flawed human being like anyone else. Her sweetness countered those shortcomings.

To sum up, this film is one of the best animated films I've seen. I will say it is one of the best films of the past year. It is a testament to the power of animation to tell a wonderful story. There is still magic out there. I've seen it up on the screen. Do yourself a favor and check this film out. You will be rewarded.

Until Next Time
Posted by Eric Noble at 4:50 PM 11 comments:

Hello Everybody!!!! Sorry for being away so long. Once again, I've been feeling uninspired. Today, I'm bringing you some one-page gag strips by the master Duck artist himself. These are all from Walt Disney's Uncle Scrooge. 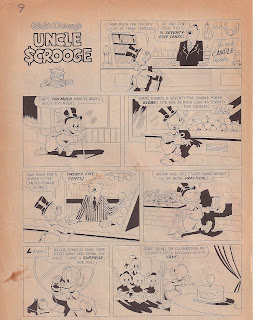 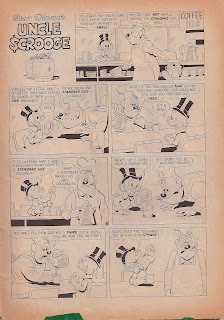 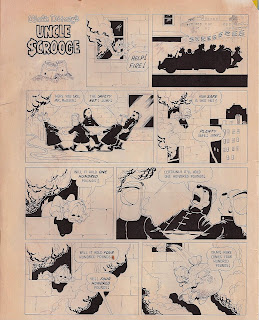 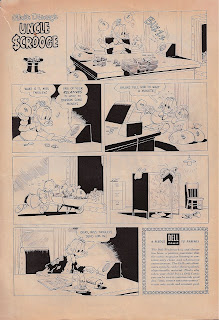 May everyone get what their heart desires! May those who are less unfortunate this time of year find hope and healing. I send my love to all of you!

We're in the final stretch people. How will Alice fare in the Queen's makeshift trial? Probably not well. And we're off! 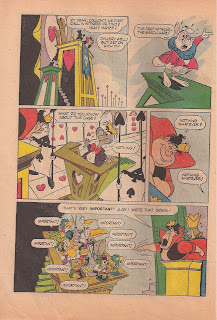 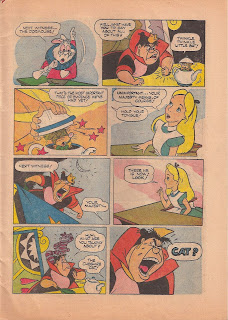 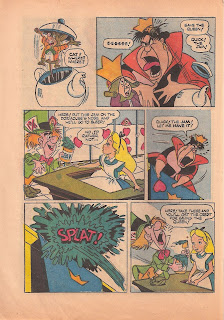 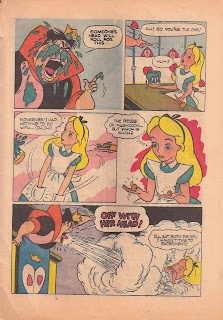 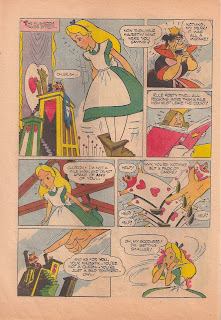 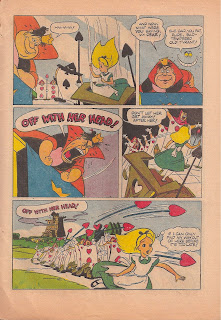 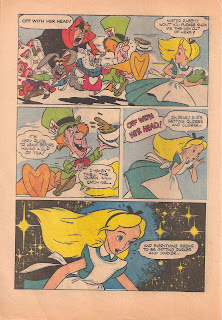 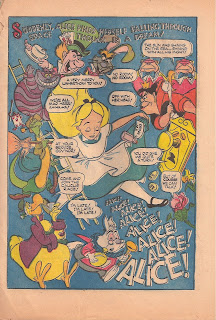 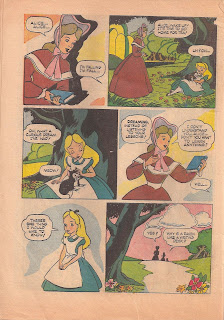 Here's a little cursory sum up of the whole comic. For those of you who weren't paying attention the first time. 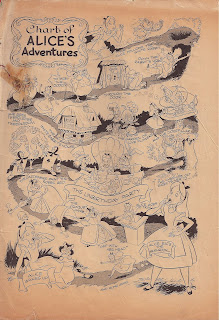 Thank you for taking the time to read through this. I hope you've all enjoyed it. It was a nice little comic. It skipped other parts of the film (the Walrus and the Carpenter, all of the songs, etc.) but it was entertaining enough. However, Riey Thompson may not have been the best pick for drawing this. His drawing chops probably were not up to the task of drawing a more realistic character like Alice. Still, he did a good job.

Coming up soon: More Carl Barks and Uncle Scrooge!
Posted by Eric Noble at 11:54 AM 2 comments:

Eric Noble
I'm a community college student trying to make his dream of being an animator/cartoonist come true. That way I'm not living with my parents when I'm 35.